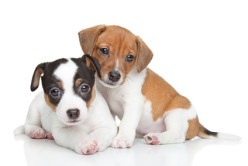 How to stop puppy biting and chewing is a training that needs to be started early in a puppy’s life.

A puppy’s biting and chewing habits are behaviors that we don’t like to see in our own puppies. Our friends and neighbors puppies might be so badly behaved as that, but not our puppy. But with all our good intentions, how to stop a puppy biting and chewing remains a problem. So how do we deal with this?

Well, the fact is that it is natural behavior for a puppy to bite and chew and that starts from birth; mouthing their siblings is normal activity for a tiny puppy and that continues to happen as the puppy grows.

The next stage is that when a puppy is old enough to leave his mother and is taken into a new environment, almost the first thing he will do is to mouth his new owner.  This is a puppy’s natural habit and his way of getting to know his adoptive parent, and that’s understandable behavior.  However, if we don’t discourage this behavior he will continue his mouthing which will become biting and chewing.

What is necessary for us to remember is that humans use their hands to get to know their surroundings, as well as talking to others and asking questions.  Our puppies can’t ask questions of us, nor can they touch and feel in same way as we do.  The alternative for a puppy is to use his mouth; that is normal behavior for all animals, including our puppies.

Stop Puppy Biting and Chewing By Understanding His Instincts

Having the knowledge that a puppy’s instinct doesn’t tell him that we are unhappy with his behavior of mouthing, biting and chewing, it is our job, as the puppy’s owner, to train him in a way that he will learn not to bite and chew on anything other than his toys, or treats that have been given him to chew on.

It’s obvious that teaching a puppy to stop biting and chewing everything that he sees and believes is okay for him to tackle, is quite a challenge and therefore requires much patience on the part of the owner.

What this means is that we have to be alert and on the watch for what our puppy is up to.

For instance if you turn away from him, or move into another room, he could start chewing something such as a cushion or the leg of a sofa and be having a grand time until you return and catch puppy at it. By now, he’s probably done some damage.

This is where patience is really important as it will not be helpful to punish your puppy for the damage he has done; as far as he is concerned he has been doing what is natural for him.

For you to teach puppy not to bite and chew you and your surroundings, you would need to give him toys that he can bite and chew and have fun with him while he is playing with those toys.  You can give him lots of pats and cuddles during this play time and tell him he is a good boy.

When puppy gets tired of playing with his toys and he starts to bite and chew, either the furniture or biting your hands, then you need to move him away from you or the furniture and let him know that is not good behavior by very firmly saying ‘no, you must not do this’, or words of your choice.  Don’t give him any pats, cuddles or treats at all, and let him know that you are not happy.  He will learn, as puppies really do want to please their owners.

If your puppy goes straight back to chewing or biting, then it would be acceptable to put him in his crate for a short while.  By doing this he will forget about the biting and chewing for a while.

Be sure not to punish puppy when you put him in his crate, because punishment at this time will make him nervous of being in the crate. He will relate the crate with unhappiness.

With patience and understanding on your part, together with constant training, your puppy will learn that mouthing, biting and chewing are no longer acceptable.

It is, in fact, at the time of first introduction to the new home that puppy mouthing should be discouraged.